Meet and greet on arrival at Jomo Kenyatta International Airport, safari briefing followed by a transfer to Wilson Airport for direct flight to Masai Mara game Reserve arriving in time for lunch at your Lodge , afternoon game drive until sunset returning to the camp to freshen up and sit for dinner and overnight at Mara Serena Lodge (LDBB)

Further full day in Masai Mara with morning and afternoon game drives in the park. Our main aim is to track the moving herds of wildebeest, and witness as many large river crossings as possible. All meals and overnight at Mara Serena Lodge (LDBB)

Further two full days in Masai Mara with morning and afternoon game drives in the park . All meals and overnight at Mara Serena Lodge (LDBB) 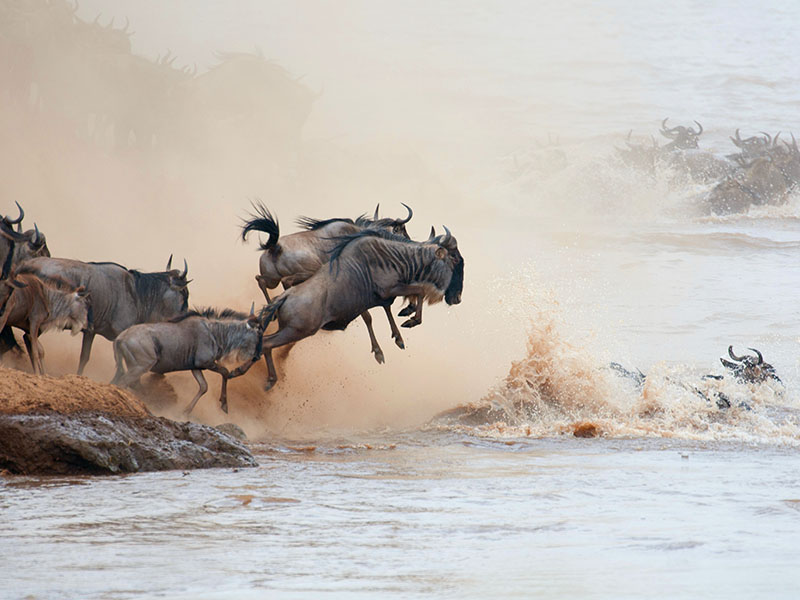 A masterful interpretation of a traditional Masai village, Mara Serena Lodge seemingly floats on a sea of savannah. A beautiful pool looks out over the wide plains. The rooms are Masai-influenced in style yet extremely comfortable. The main dining room, where delicious meals are served, has three large domes and three small ones depicting Maasai manyattas (villages). Occasionally an African al fresco barbecue is served by the pool overlooking the Mara plains. Fresh fruit juices and cocktails, wines, spirits or liqueurs are available at the bar until late in the evening. 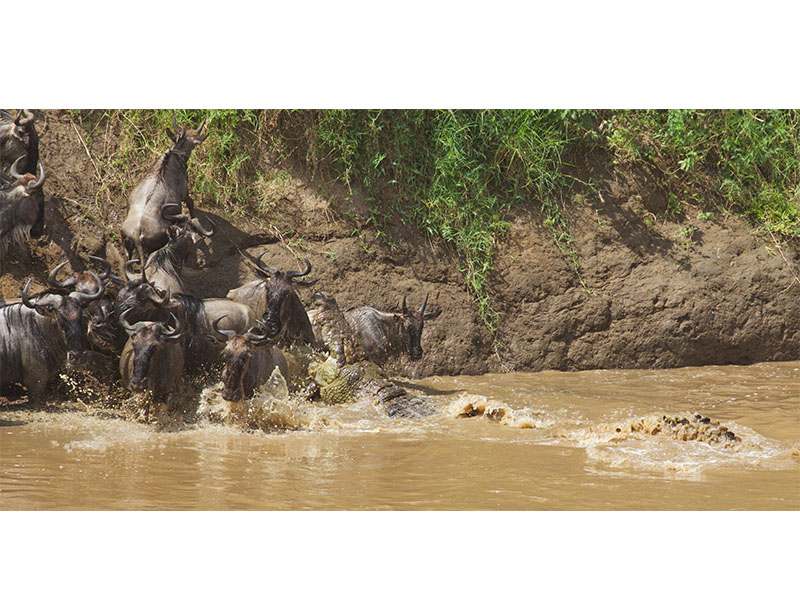 At Serena, the views are stunning. It is on this very terrain, stretching endlessly before the lodge, that the annual migrations take place. Millions of wildebeest, zebra and gazelle pass through on their way to and from their alternative feeding grounds in Tanzania. The Mara Serena offers you a grandstand seat for one of the greatest shows on earth.

Breakfast at the lodge , depart the lodge with a game drive across the reserve as you transfer to another section of the Mara , settle at your camp mid afternoon at leisure, lunch at the lodge , afternoon game drive in the Game Reserve , dinner and overnight at Mara Sarova Camp – (LDBB)

Sarova Mara Tented Lodge has 75 tents and is located in the world-renowned Maasai Mara; home to the greatest game show on earth – the Wildebeest Migration

The lodge is situated on an elevation astride two streams, with extremely beautiful gardens. The luxurious tents all have permanent roofs, zip-up fronts, electricity and ensuite facilities.

Relax outside your own tent listening to the orchestra of rasping Cicadas, croaking tree frogs. The intermittent call of birds and monkeys is a memorable symphony.

The Isokon Restaurant offers a wide range of cuisine and with special barbecues are held by the swimming pool beneath the star filled skies. The restaurant has two sections, one internal and one external with a canopy. Breakfast and lunch are buffets, whilst dinner is Table D’hote. The capacity is 150 people

The Oloip Bar is located on the ground floor, it is perfect in the evenings with a cozy log fire is lit in the fireplace in the Bar. It has a capacity of 150 people and operates between the hours of 0700hrs-2300hrs.

Complementing the simplicity of the camp is cozy log fire that is lit in the Oloip bar every night, when the temperature drops. This is where traditional Maasai performers with their rich cultural dances and music entertain guests.

Probably the most famous of the reserves, the Masai Mara, in Kenya's southwestern corner, boasts an astonishing amount of game. Unfenced, the Mara is bounded in the east by the Ngama Hills and in the west by the Oloololo or Siria Escarpment. Gazelle, wildebeest and zebra graze in large numbers and where prey is found so are predators. Not only is this a great place in which to find game, but also the wide greeny-gold savannahs spotted with thorn trees make it ideal for photography. The Mara, as it is known in Kenya, is ravishingly beautiful and also offers long, undisturbed views and utterly dramatic panoramas. The weather really means something here. The sun may beat down unforgiving, huge clouds in fabulous shapes may sweep across the widest of skies; the wind ripples the grasses as though a giant hand strokes them. The landscape is stunning. The famously black-manned Mara lions are possibly the stars of the Mara show, but cheetah, elephant, kongoni, topi, Thompson's gazelle, waterbuck, hyena, and primates are all here too.

As with the rest of Kenya, the birding is good. There is no settlement within the reserve however, the Mara is in theory owned by the Masai, pastoralists and, in earlier times, renowned lion-killers. Lodges and hotels offer the opportunity to buy their beadwork, checked cloths and copies of their spears. It is said that if lions scent approaching Masai on the breeze they move swiftly in the opposite direction. Famously, the Mara is the northerly end of the Great Migration, that great primeval surge of wildebeest, zebra and antelope that sweeps in from Tanzania's Serengeti to Kenya's Masai Mara as the Tanzanian grass starts to fail. The large predators who pick off the weak, the stragglers and the young track them. The great herds, nearing their destination by July, mass along the Mara River, pushing, shoving and fantastically noisy, just waiting for the first animal to cross so that they can all follow, lemming-like, on the final leg of the journey. However, crocodiles lie in wait, sluggishly cruising the waters, fully prepared for their best meal of the year. Many fail in the life-and-death struggle - drowned, eaten by the crocodiles or, made careless or weak by their stressful swim, brought down by lions. The Masai Mara is terrible yet wonderful, and not to be missed. 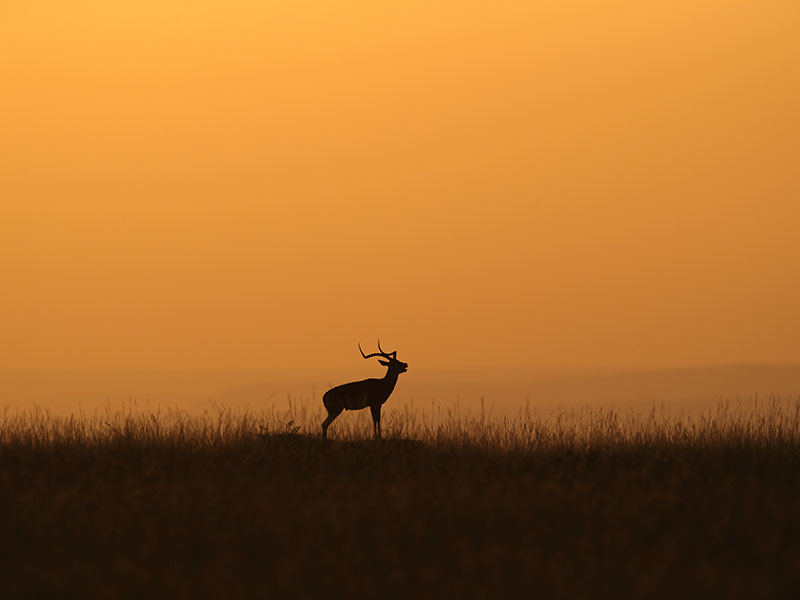 Situated in the heart of the Rift Valley, Lake Nakuru is one of Kenya's most famous soda lakes. A major feature of this park is the wonderful bird life, particularly the thousands of flamingos, which create a shimmering pink hue over the lake. A rhino sanctuary also provides the opportunity to see the endangered black rhino.

Originally declared a national park because of a superbly diverse bird population, which includes many migrants, the park is also a favourite place for travellers to seek the rare black rhino. However, it is for the flamingos that the lake is best known, and it was for their protection that the park was originally created. The level of the blue-green alkaline waters here varies and this, with other accompanying environmental changes, causes considerable variation in the flamingo population, but when they are present, en masse, the whole lake turns a gorgeous rosy pink.

Although protection of the flamingo population on the lake was the original rationale for the inception of the national park, further land was included in the early seventies and it is now about 190 sq m. This expansion, which took in a large grassland area, has allowed the park to protect further species. Buffalo, zebra, antelope and both lion and leopard are to be found. The rather less ubiquitous reedbuck and waterbuck are also here as is the glamorously leggy Rothschild giraffe. Temptingly, the black rhino-breeding programme, started in the late eighties, has proved successful and this is an excellent place to view them. 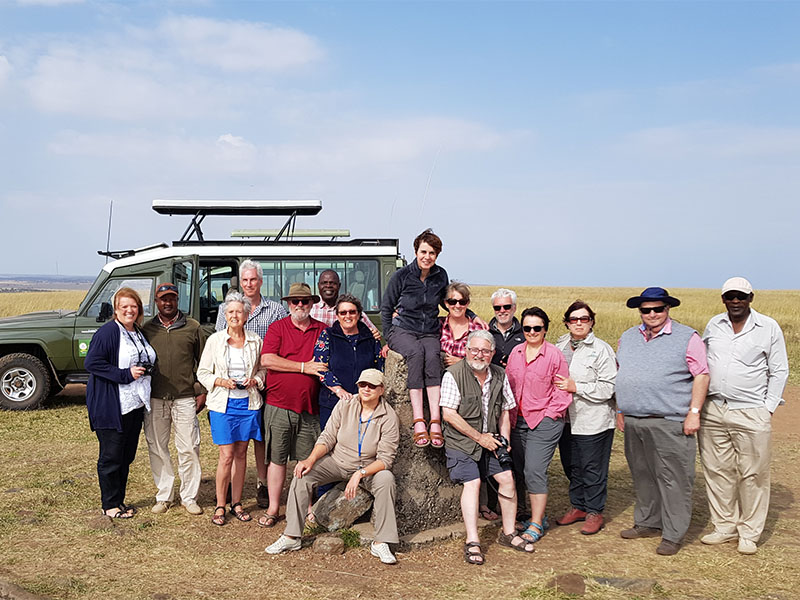 Lake Nakuru is a small national park. There is no need to stay in the area in order to see all that is to be seen. A good day trip may be enough and these can easily be organised from the Lake Naivasha area.

Breakfast , mid morning at leisure taking shots of a bundant birdlife within the camp compound , lunch at the lodge , afternoon depart and drive to Nairobi